Go on, you know you want it 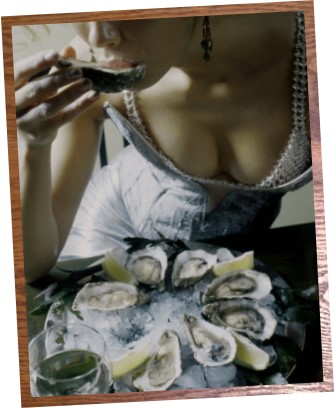 Your first oyster is a rite of passage comparable to your first sexual experience, says Lisa Hilton. She should know - she did both one year on holiday in France. Now a confirmed addict, she trawls Paris in search of salty, sensuous pleasures.

During a memorable summer in Agde, in the South of France, I lost my virginity and ate my first oyster. One experience left me feeling mysteriously adult, sensually alive in a way I never had before, full of the promise of the future. The other involved a tent and a Dutch bloke who worked in a record shop in Rotterdam. Perhaps it was no accident that the two events coincided, since the association between oysters and sex has been so hackneyed as to become an embarrassing cliché.

A friend tells me he cringes when ordering them on a date as it seems shamingly obvious, but since the cliche exists it seems best to get it over with briskly (rather like losing one's virginity).

My father - Freudians take note - held the shallow, escarped shell up to my lips as my little sister writhed in disgust, I tipped up my head, exposing the soft skin of my teenage neck, my mouth opening, my eyes involuntarily closing as it slipped down my throat as easy as original sin. I swallowed hard, I was initiated, and I have been an addict ever since. Years later, I felt immediate empathy with Anthony Bourdain's description of his first time in his book Kitchen Confidential: 'And in that unforgettably sweet moment... that one moment still more alive for me than so many of the other "firsts" which followed, first pussy, first joint, first day in high school, first published book, or any other thing - I attained glory.' The sexual association seems inevitable, as does the sense of epiphany. Perhaps more than any other food, the oyster lends itself to a sense of gastronomic maturity, to an emblematic revolution of the senses, after which, one knows, with the bittersweet nostalgia of innocences lost, that nothing will be the same again.

I learnt about oysters in Brittany, when I was 18, working the summer season as a waitress in Concarneau. My hours were 10 until two in the morning, seven days a week, May until September. With the frenetic, forced energy of the truly exhausted, I surfed through the days on a tide of oyster liquor, ferrying plateaux of fines de claire and speciales to jolly French families while the prawn-skinned Brits looked on disparagingly over their crêpes. The smell of oyster flesh could never be scrubbed from my skin, my hair, my clothes. I was certain I could never bear to swallow another.

Waking in my huge bed with its dingy red chenille throw, so vast and lumpen that I was convinced it had once served half the sailors on the Atlantic, I just had time to splash my face with water before picking my way through the crates of langoustines waiting on the docks on my way to the market. Although Fabrice, the chef, was six foot five, at the market I was the strongman of the party. He would trip with balletic delicacy through the stalls, discussing the plumpness of the day's speciales de Bretagne, dipping his mouth to savour a round-shelled belon, while I staggered behind with the crates. Back in the kitchen, a huge joint dangling from his lips and a cloth of unspeakable filthiness binding his left hand, he would shuck 500 or so in a matter of minutes. I learned that in France, the oyster has retained its place as a pleasure of the poor, rather than a delicacy to be savoured amid starched napery. Oysters were as cheap and cheerful a holiday treat as ice-cream, and our customers gobbled them by the thousand.

One glorious day in August, delirious with fatigue, the boss declared he couldn't take any more. Ignoring the groaning queue of oyster munchers, he hung up the 'closed' sign, and we slumped on the terrace, too tired even to smoke. Fabrice brought out an iced bottle of Pouilly-Fumé and a tray of speciales de marennes, the curious green-skinned oysters whose colour derives from being repeatedly exposed to the air as they grow in their pits, so that the oxygen forms an emerald algae. The taste is rich, curious, dense, and with the cold wine they caressed away our exhaustion. I was hooked again.

A few years later, when I moved back to Paris, I was surprised again by the abundance of oysters. At Christmas on the Ile St-Louis, my neighbours wished each other 'Joyeux Noël' in the streets, with balsa-wood boxes packed with ice and seaweed dangling from their arms, the oyster as essential an ingredient of the Christmas feast as the Brussels sprout in Blighty. The Parisian oyster has retained its democratic ubiquity. From the street markets of the Rue Mouffetard and Rue de Buci to the dark, serious brasseries surrounding the Bourse, they are everywhere.

The French eat oysters all year round, though the best season is September to April, after which the meat becomes a little milky. Even in August, though, they are delicious with shallot vinegar. If the association between oysters and sex is a cliché, then oysters eaten in Paris are a bigger one, but unlike so many of the city's celebrated delights, it rarely disappoints.

Oysters, and the grandes brasseries where they are enjoyed, are part of a populist tradition of pleasure in the city. Long before Conran created his gastrodromes, the brasseries of the boulevards with their armies of sallow, scuttling waiters, plate-glass windows and banks of seafood were opened to cater to the newly prosperous middle classes of the nineteenth century. The oyster has a place in the architecture of the city which Haussman transformed, the Paris fed by the world of Zola's Germinal, and the exhibitions of the Second Empire. Perhaps somewhere in a French university there languishes a thesis on the role of the oyster in the class structures of the realist novel. Eric, a waiter at the Brasserie St Regis, puts it more simply: 'Everyone loves oysters, tourists and Parisians. They're for everyone.' Thankfully, this is still true.

Walking home from the Pantheon in the evenings, I am often tempted by the extremely civilised 'aperihuître' at the Bar à Huîtres on the Rue St Jacques. Two number four huîtres creuses (rock oysters) and a small belon, along with a glass of Sauvignon Blanc are €7.50, perfect for solitary pre-dinner indulgence. The Bar à Huîtres has three branches, and despite being a chain is an excellent place to discover the variety of oysters Paris offers. Seven kinds are available, from fines de claires at €7.50 for six to firm, juicy belons grosses at €22.50. Rather grander than the Bar à Huîtres, and handy for a light lunch after a morning's shopping at the Bon Marché, is the brasserie of the Hôtel Lutetia. Oysters here are served in threes, with six varieties ranging in price from €5-19. A bit obvious, but still great fun if you don't mind queueing for a table, is La Coupole. The interior is a huge, vivacious mélange of Deco and Baroque, and though no one really goes for the food, the oysters are as good as anywhere and the crowd a shouting, crunching, claw-snapping circus.

But the cheapest way to enjoy oysters is to bring them home. The daily markets in Rue Montorgueil and Rue Mouffetard have excellent oyster stands, as does the Sunday morning market on Boulevard Richard-Lenoir, near the Bastille.

My favourite recipe for cooked oysters comes from my 78-year-old neighbour. Remove a dozen oysters from their shells, straining and reserving the liquor. Put two shallots and a clove of garlic in a pan with a little butter, cook for a few minutes and then add 2ooml of champagne, heating vigorously until reduced by half. Add 2ooml of double cream, then heat again until halved, pour in the oyster liquor, season with salt and pepper and keep warm. Slice the top off 12 little brioches, pull out some of the dough and brush all over with melted butter before baking for five to 10 minutes in a hot oven until slightly crispy. Place an oyster in each brioche, spoon in the sauce and chop a whisper of tarragon on top, then replace the little hat on the brioche and serve. This is courtesans' food, the kind of recipe that caused the French Revolution, and I can think of nothing more heavenly for breakfast.

For the purist, the best place in Paris to eat oysters is probably Garnier. It is not the cheapest, nor the most prepossessing of restaurants, stuck in a Seventies time warp opposite the Gare St Lazare, but it's worth ignoring the frosted scallop shell lights in the interests of education. The staff are happy to show off their expertise, and a mixed plate of 24 oysters provides the opportunity to feel like a connoisseur.

Fines de claire, the farmed staple of the oyster market, are a good starter, though their flesh can be rather thin and meagre. Speciales de Normandie are salty and savoury, while their Breton cousins are softer and smoother. The huge speciales de Marennes are too unmanageable to swallow in a single sexy gulp; though gentle and having a good flavour, they can seem a bit heavy. The belon is my personal favourite, magnificently strong and firm.

Sadly, there are now a lot of awful things to be eaten in Paris, from the Eurofusions of the Costes chain to the sub-Greek horrors of the Quartier Latin. Parisians are no longer immune to the lure of Le Big Mac. Oysters remain, though, as cheap and elemental a part of the city as one of Toulouse-Lautrec's dancing girls. Conventional maybe, but enduringly seductive.

These icons link to social bookmarking sites where readers can share and discover new web pages.